Some people will be surprised to learn about substantial wildlife in Illinois. There are many wild places in Illinois, even around Chicago. Illinois is found on the shores of Lake Michigan, and the shoreline includes a weird backward flowing river of Chicago. Both bodies of water are home to many wild organisms. Illinois holds many mammals, birds, fish, reptiles, insects, amphibians, and many other animals. 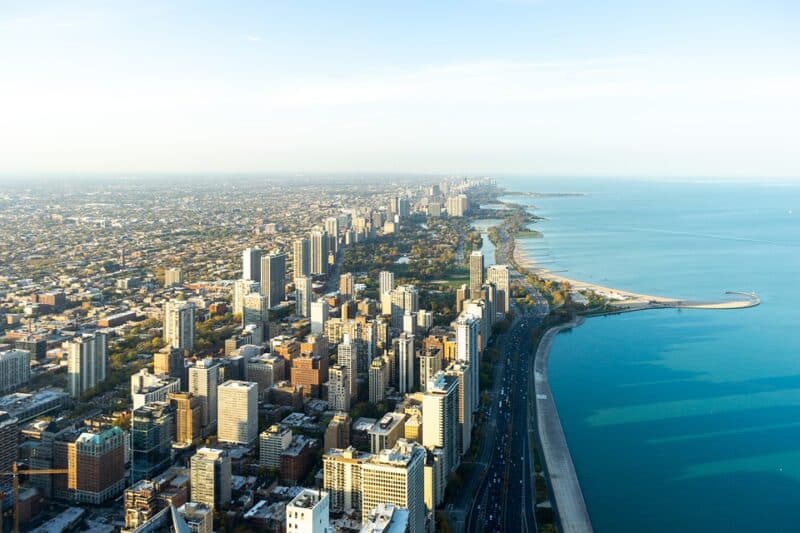 Many wild animals consider Illinois as their home. So do not get surprised if you get to meet some of them while discarding the trash in a trash can with an unpleasant smell. People of Illinois live with the animals around their town harmoniously only if they know what kinds of animals are common in their place.

Places to look for Top Wild Animals in Illinois

In Illinois, visitors can experience wild creatures in abundance because it is blessed with many wildlife refugee areas. The Driftless Area is an amazing site for birdwatchers as it is also part of the Mississippi Flyway. You can also witness trout and other freshwater fish in the Driftless Area, which is found in the state’s northwest corner.

There are other places where you can find Illinois animals, including Shawnee National Forest near Harrisburg. Bald Knob, Lusk Creek, and Garden of the Gods are wilderness areas of Shawnee National Forest. In addition, areas around the upper and middle Mississippi River, Crab Orchard, Meredosia, Hackmatack, and Emiquon contain other wildlife refuges.

White-tailed deer is one of the most common mammals in the United States and is known as the state animal of Illinois. It is named white deer because of its tail. When the tail is raised, its underside is white when it runs.

The northern cardinal is the state bird of Illinois, and it stands out because of its beautiful bright red plumage.

They are considered dangerous as they are irritable and can be wild without any warning. After two centuries, they have returned to Illinois. If you see any Bison around you, enjoy their presence from a distance.

If you ever encounter Massasauga in the woods, you better leave it alone because it is venomous. Despite being dangerous, Massasauga is a beautiful rattler with a pattern of brown blotches on the gray ground and keeled scales.

The striped bark scorpion is the United States’ most common insect. Its size is only about 2.75 inches long, which is the medium size for a scorpion. However, it contains a neurotoxin that is more dangerous to people who are allergic to its venom. In addition, though its size is not that big, its sting is quite painful and they are potentially dangerous.

Cougars are considered to be very dangerous because they have been known to attack humans. In addition, they are large predators as they attack humans, and other giant animals are often seen passing through the state.

Bobcats are also known as Felis Rufus. In the mid-1900s, they were eliminated from Illinois, but now you can find them statewide. Bobcats are very beautiful as they have yellowish to reddish-brown fur with black spots and streaks throughout. Their fur keeps changing color; as the winter comes, the fur changes into grayish brown. The fur they possess on the underparts is white with dark spots. The color combination of the fur according to the season is amazing.

Bobcats were protected from 1977 to 1999 because they were named one of the endangered animals in Illinois eliminated by the mid-1900s. Bobcats are more common in the southern third of the state, but they can also be found throughout Illinois.

A regular bobcat hunting season was initiated in 2016 because the number of bobcats in Illinois increased in abundance. As the expansion of bobcats was increasing, a bobcat harvest was regulated by IDNR. It gave opportunities to hunters and trappers to maintain a healthy population but ensure a growing or stable population. This ensured that the bobcat population grew, especially in forested areas and major rivers.

Coyotes resemble dogs as they belong to Canidae (dog family) such as red fox, gray wolf, and gray fox. Coyote is a medium-sized dog, but they do not exactly look like a dog as their tail is bushier and their nose is more pointed. In addition, they do not keep their tail straight while running. Rather they keep their tail down between the hind legs.

Coyotes are also known as prairie wolves or brush wolves. Illinois pioneers gave this name. To study Coyotes, a lot of work has been done by the Urban Coyote. They are known to be very good swimmers. They can also run up to 43 miles for very short distances per hour. In winter, coyotes’ fur gets thicker than usual, which makes them look larger than they are. As a result, people often get mistaken for giant dogs, whereas they are just medium-sized dogs.

Coyote carries rabies, parvovirus, Sarcoptes scabiei, and canine distemper. Still, they are not considered a public health concern cause only Sarcoptes scabiei and rabies can be transmitted to humans and have public health implications. In addition, they carry the disease to which domestic dogs, cats, and livestock may be susceptible.

Raccoons are medium-sized mammals with grayish-brown fur and a very eye-catching black eye mask, which is very eye-catching, and this black eye mask often identifies them. The sound of the raccoon is similar to the whistle of a screeching owl. They use vocalization for calling each other. They belong to the Carnivora order, badgers, cats, bears, dogs, and carnivores.

Raccoons do not choose to hibernate in severe weather conditions. They chose to stay in their den even in severe winter or summer conditions. In areas with a large population of raccoons or winter months and limited shelter, they choose to stay in their den with other individuals. Raccoons are very good at swimming and climbing, and if they sense any danger, they can climb up a tree for self-mechanism. But raccoons can growl and may try to defend themselves as far as a raccoon is concerned.

Raccoons can help control insects and rodent populations as they are mesopredators. If the population of raccoons gets too large, they can affect the bird population on a large scale by feeding on eggs and nestlings. And they are available in large numbers in Illinois.

Raccoon roundworm is an Ascarid Nematode that is infectious to humans. They can be infected by many parasites, including different kinds of tapeworms and roundworms. If humans come in contact with or happen to eat or ingest the eggs of roundworms shed in the raccoon feces, they can get infected. So if you happen to come near a raccoon or any physical touch, do wash your hand with hot soapy water. And if you are willing to do gardening, then wear gloves as a precautionary measure.

Beaver can be easily found in aquatic regions in Illinois. Beaver animals stay active at night, but they seem active before the winter season(late summer and fall) because they have to prepare for the cold season. Beavers are known as aquatic animals because they usually stay in the water. They only come on land just to find food. Sometimes beavers have to travel from one place to another to find a new territory. They prefer to live in colonies which are consisted of a male and a female. In Illinois, many beavers live in burrows as they are also well known for their ability to build canals, lodges, and dams.

The beaver is one of the animals in Illinois that do not hibernate. They have to store food for the winter. Every animal has their response to danger, so when beavers sense any kind of danger around, they slap their tails against the water so they can also warn the beavers nearby. Usually, they are calm in nature, but they can be quite aggressive when concerned. Beaver plays such an important role in functioning the ecosystem properly, whereas the beaver dam-building can cause problems for people. Beavers create homes for mammals, reptiles, amphibians, waterfowl, and shorebirds as they control the water level and create wetlands and other habitats.

Beavers carry Giardia and Tularemia disease. Tularemia is a fatal bacterial disease to beavers that is transmittable to humans if they come in contact with contaminated water or infected animals. Therefore, it is instructed that people should not drink water from where beavers are present. Water can be contaminated if any infected beaver drinks from the same water or if any beaver dies in that water, the whole water will be contaminated. Therefore, whosoever drinks from the same water will be prone to Tularemia. In addition, humans can be infected from Tularemia through tick bites, contaminated water, or coming in contact with infected animals.

American Elk is not available in the large population in Illinois because they were gone by the early 1800s from Illinois. Before that, they used to be found throughout the state. Nowadays, they are held in captivity by landowners. They have become so less in number that it is requested that if anyone sees them free-ranging in Illinois, people should report to the Illinois Department of Natural resources.

Black bears have short thick legs, a compact body, and a rounded appearance. They have a short tail which is approximately 4 inches long. Black bear eats both plants and animals. They are usually black or dark brown. Their ears and head are round and large. There is a small patch of white-colored fur on the chest.

Black bears can show two types of behavior. They can either get offensive or defensive. You do not need to run if you see any black bears around you because they do not attack humans unless they feel in danger. They usually attack or respond to the situation if they feel trapped or provoked. It is better that you do not approach this animal, try to respect their privacy. They do not attack first, but if you come across one, try to go inside the building or get into the vehicle and let the black bear know that you are not there to harm them or make them uncomfortable. If they feel danger, they will pop their jaws or blow air out of its mouth, vocalize or lunge toward them. So when you see this kind of behavior, you better stay away.

If you are planning to travel to North America for wildlife encounters, take a look at these bogs; wildlife in California and Colorado.