The finger monkeys are miniature-sized animals and an amusing topic to discuss when it comes to unique animal species.

They are commonly referred to as Pygmy Marmosets, are the most miniature monkeys ever to exist on the planet. Being tiny-sized animals, finger monkeys attract almost every human being.

Loved by people from all walks of life, these tiny creatures make perfect pets. However, finger monkeys are not a common breed of monkeys and their existence as pets has become quite controversial as a monkey. It’s because, generally, monkeys aren’t considered good pets.

That’s why we always suggest that having ample information about the animals you plan to have as a pet is a must. So, if you are planning to get this tiny animal for your home or want to learn more about the world’s most miniature monkeys, this article will help you make a decision.

In this article, we are going to discuss everything about finger monkeys, from their lifespan to lifecycle, diet to habitat, and size to weight, making it an exciting read.

So, grab a bowl of your favorite snacks and unearth everything about this insanely attractive monkey breed.

What are Finger Monkeys? 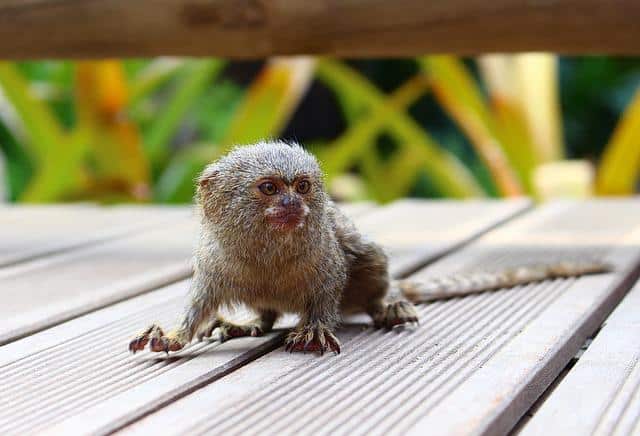 As their name suggests, Finger monkeys are the tiniest sized monkeys that can easily fit in any adult human hand. Due to their utterly small size, they’re also called Pocket Monkeys. Otherwise, as mentioned earlier their scientific name is Pygmy Marmosets.

Notably, this particular money breed belongs to the small genus of New World Monkey. More precisely, they are known to be the tiniest monkeys and one of the smallest primates ever existing on the planet – Earth.

Size Of The Finger Monkey

There is a common misconception about the size of Finger monkeys. People often infer their height from the human’s finger. Probably, it’s due to their very name. The second reason can be the photographs available on the internet – clinging to humans’ fingers.

In reality, a fully grown finger monkey will outgrow the finger size of humans. Overall, its length may reach 5 to 6 inches without including the height of its tail which may grow for up to 8 inches.

Due to their small size, finger monkeys can easily fit into the hands of adult humans. Also, this shows they have an extended tail that exceeds their actual body length.

Colour Of The Finger Monkey

Besides, they have mainly defined white patches on their face, representing their eyes with a white line.

Before digging deeper into the interesting facts and details about Pygmy Marmosets or pocket monkeys, let’s unearth their scientific classification and evolution.

Beginning from the bottom line, Pygmy Marmosets – aka finger monkey or pocket monkey – belong to the Animalia kingdom having phylum Chordata. Also, their subphylum is a vertebra.

Moreover, they belong to the cards of Mammalia from the order Primates. Also, note that Pygmy Marmosets are one of the smallest primates in their particular class.

If we narrow down its scientific classification further, we get to know that Pygmies belong to the suborder of Haplorhini and the infraorder of semiliforms.

Overall, they belong to the family of Callitrichidae, which falls under the Cebulla genus. Their scientific name does not have any relation to their size. Instead, it concludes with their genus, which is why their scientific name is Cebuella Pygmaea.

As demonstrated above, the finger monkey’s size is the thing to discuss. The insane tiny size makes these monkeys one of the unique animal species and famous pirates.

However, the account of their exclusivity does not end at their particularly miniature size; instead, it has much more hidden underneath.

Here are a few fantastic facts about finger monkeys that will leave you super astonishing.

Breeding is a common phenomenon in these little pirates, just like others. Precisely speaking, the breeding season for finger monkeys lasts throughout the year. However, certain conditions are involved in their breeding process.

For instance, a male – up for breeding – will spot a particular area with his scent while searching for his mate and eventually follow one female monkey.

One male and one female finger monkey can breed and live together for the rest of their lives. Also, they produce in a troop breed, and the other group members help care for their newborn baby.

The pregnancy lasts between 119 to 140 days. According to most studies, the female finger monkey gives birth to twins almost twice a year. There is an 8% probability for triplets and a 16% chance of just one monkey being born at a time.

As a rule of thumb, gestation is the very first stage. Notably, the gestation period of finger monkeys approximately lasts twenty weeks. In addition, it is essential to mention that a female pygmy has two babies in a litter. In some rare cases, they can also have one or three babies.

Once the gestation period of the pygmies is over, which lasts approximately twenty weeks, they finally give birth to tiny baby finger monkeys. Imagine the delicacy and miniature size of these baby pygmy marmosets!

Please note that during the initial few weeks, the newly born baby’s life rides around on its father’s back. Also, the father plays the role of the newborn’s caretaker.

Adult monkeys are still as cute as they were when they were babies and are too small to cause harm to humans, but they can act quite viciously when fighting over turf.

Adult pygmies like to live in groups and are famous for being exceptionally intelligent and speaking differently from their groups’ monkeys. Adult pygmies grow to no more than six to seven inches on average, weighing around just one hundred grams.

One should not underestimate their size because these tiny monkeys can jump about fifteen feet in the air, swinging between forest branches.

Finger monkeys are social creatures who prefer to travel and live in groups. Turf wars are fierce and are famous for being savagely territorial.

On average, a group of pygmy marmoset monkeys has about seven to eight members with an equal number of males and females. Because they prefer living in a group, it is a lot better for them and for you to have at least two pygmy marmosets if you want to keep them as pets.

Pygmy marmosets love to be surrounded by company, are smart enough to have linguistic skills, and can even communicate with different monkeys using variable patterns, including squeaks and chirps.

If a group member spots an ocelot, it alerts the rest of the group to hide and protect themselves in the trees. The finger monkeys are timid animals that prefer staying with their group even when hiding in the trees.

Before you keep them as pets, it is essential to know that they are easily irritated and agitated and very quickly catch human infections like the flu. Most vets often correlate finger monkeys with children because they are intelligent and playful but can also misbehave.

These monkeys make a lot of squeaking sounds, fight, and even throw feces at each other most of the time. They have a very high temper and may bite, scratch, and attack you.

Even though these monkeys are complex creatures, blending them with your family is possible. Their cute and adorable faces make you perceive that they would be fantastic as pets, but in reality, they’re not as easy to handle as you think.

Commonly found in Ecuador, Brazil, and Columbia, the pygmies like to live in tropical climates that are humid and rainy throughout the year. i.e., The Amazon Rainforest.

Living on tall trees with their families allows them to jump to the neighboring branches of other trees. They also crisscross one tree to the other to hide from their predators. Their brown fur also helps them to stay hidden among the dark branches and tree trunks.

Finger monkeys are born hunters and can be found hunting down insects like moths, spiders, and beetles. They are omnivores, so apart from insects, they also like to eat fruits and nectar.

Even though they hunt, a finger monkey’s primary food source is tree sap. The marmosets have sharp teeth that help them dig holes and peel the tree’s bark back. The monkeys keep going into the bark until they locate the sap, and once they do, they drink it like a cat drinks water from its bowl.

Finger monkeys look for food in the morning and don’t need to eat bulk food to survive because of their small size. They only consume a tablespoon of tree sap at a time.

The finger monkeys in zoos eat a special diet mixed with vegetables and fruits that these monkeys can easily digest. Careful monitoring of the amount and type of food is essential because they cannot consume processed food as it may cause them harm.

It is evident that because of their small size, finger monkeys are a target to many animals in the forest. They quickly fall prey to hawks, snakes, ocelots, and especially the eagles and big birds because the finger monkeys like to stay high up on the trees.

Along with the eagles, snakes like the pit viper can easily climb tall trees and attack these monkeys. The defense system of the finger monkeys consists of their speed and ability to hide against these predators.

Finger monkeys are the animals at the lowest risk of extinction due to their high birth and low infant mortality rate. However, an alarming situation that could lead to their endangerment is deforestation and environmental threats that have been proposed due to the changing global climate.

Cutting trees means that these monkeys won’t have a home to live in or a hiding spot to protect themselves from predators. Along with protection, the trees also provide them with their food source.

Another threat to the finger monkeys comes from humans. The finger monkeys are captured and sold as exotic pets worldwide. This illegal trade of animals has also significantly reduced their population.

What kind of animals are finger monkeys?

Finger monkeys are mammals and classified as omnivores. Meaning that they eat food derived from plants as well as animal sources. They love to eat insects and fruits. But, luckily if they find tree sap around their habitat, they will consume that before any other food.

When finger monkeys bite into the trees to get tree sap, they attract insects like butterflies and hunt them while drinking the tree sap.

Can finger monkeys cause harm?

Usually, finger monkeys are shy, non-violent animals. But, they can become irritated with other finger monkeys, especially when there is competition for mates during the breeding season.

What is the largest size a finger monkey can get?

The most giant a finger monkey can get is around sixteen inches from the nose to the end of their tail. The maximum they can weigh is seven ounces. Even when fully grown, they are still minimal.

Can you potty train finger monkeys?

You cannot train finger monkeys to use the bathroom or poop and pee in a specific place. Finger monkeys, like most monkeys, play and throw poop and urinate around the house, creating a huge mess.

How much do finger monkeys cost?

Finger monkeys are costly animals. They typically cost around four to five thousand dollars each!

Finger monkeys are exotic wildlife miniature monkeys that live in troops in a tropical rainforest climate. These monkeys are not suitable as pets as they can’t live away from other monkeys of their kind and must always have a strict diet, or they can become sick.

We hope you enjoyed reading this article and found it to be informative! We recommend this article about primates if you want to learn more.