Do you want to find out where to see Gray whales? We we have the perfect locations for you! You’ll be ready before the next whale watching season! The gray whale, also known as the grey whale, gray back whale, Pacific gray whale, or California gray whale, is a baleen whale.

Baleen whales, also known as whalebone whales. They are a widely distributed and diverse parvorder( taxonomy) of carnivorous marine mammals. Additionally, The gray whale is one of the animal kingdom’s great migrators. Traveling in groups called pods, some of these giants swim 12,430 miles/ 22000 km round-trip from their summer home in Alaskan waters to the warmer waters off the Mexican coast.

Are you a lover of whales and wanting to travel in search of the best whale-watching locations? Then read on or jump to the headline of your interest!

Can you interact with Gray whales?

Gray Whales are large baleen whales. They are medium sized whales, reaching up to 49 feet (15 m) in length, with the females usually being larger than the males.

Appearance: gray with white patches, covered in barnacles and sea lice. . They have been known to carry over 400 pounds/ 180kg of barnacles and whale lice on average. Gray whales have no dorsal fins. Instead, they have a ( Sometimes visibly) low hump.

Gray whales are uniquely bottom feeding animals. They roll on their side and suck up sediment whilst slowly swimming along the seafloor. And during their summer, can spend up to 20 hours feeding in arctic waters.

Most of the eastern North Pacific stock gray whales spend the summer feeding in the northern Bering and Chukchi Seas, but some feed along the Pacific coast during the summer, in waters off of Southeast Alaska, British Columbia, Washington, Oregon, and Northern California.

North Atlantic populations were extinct on the European coast before 500 AD, and on the American coast around the late 17th to early 18th centuries. Yet there have been recent sightings of whales along the Mediterranean sea, suggesting a repopulation in breeding grounds that were previously abandoned for centuries.

In May and June 2013, a gray whale was sighted off the coast of Namibia, the first confirmed sighting in the Southern Hemisphere. This has indicated that new patterns of migration may be arising for these whales. The round-trip journey of one gray whale has set a new record for the longest mammal migration, covering a distance of more than 22,000 kilometers across the Pacific Ocean.

During summer, they live in the Arctic areas; rich in their food with bottom-dwelling organisms. As fall approaches, there is less sunlight, less food, and the water turns cold. This is when the whales travel along the coast to Baja California, Mexico.

Female gray whales usually give birth every two to three years. At 5-12 years they reach sexual maturity and give birth to single calf after 12-13 months. Mothers and calves remain close to shore during the northward migration (usually within 200m of the coast), possibly trying to avoid killer whale attacks.  The calves spend up to 8 months under the protection of their mothers.

Mothers are very protective, sometimes sacrificing their lives to predating killer whales, in order to protect their calves.

The average and maximum lifespan of gray whales is unknown, although one female was estimated to be 75 to 80 years old.

Gray whales are slower swimmers, despite the distance of migration so killer whales are a common predator. Gray whales were once known as “devil fish” due to their aggressive nature encountering humans who tried to harpoon the whales. However since then have been known to be the friendliest gentle giants of the sea. They usually Travel alone or in small groups besides when feeding or breeding.

Gray whales have returned from the brink of extinction. In the late 1800s, the gray whale breeding grounds were discovered, and whalers killed a large percentage of the population. The drop in population made it no longer profitable to hunt gray whales, therefore they were left alone and their numbers recovered.

However, the early 1900s brought the invention of factory ships and new harpooning technology. This new technology allowed intensive hunting on the grays once again, and their population again dangerously dropped to probably fewer than 2,000 individuals.

Protection of gray whales came in 1946 through an international agreement to stop hunting them. Since that time, the population has grown. The North pacific population unfortunately grew extinct, most likely as a result of over hunting.

Anthropogenic/ Human threats: Gray whales are vulnerable to accidental entanglement in fishing gear.  Western gray whale feeding grounds are also squarely situated in important oil and gas fields off the coast of Russia, and consequently, there is great concern regarding the potential impacts of oil and gas exploration and production on the gray whale population and their habitat.

With the end of whaling, most Gray Whales have become best known for their friendly interactions with humans. They generally seem undisturbed by kayakers, even when with calves. In the birthing lagoons, some whales have begun to approach small vessels and allow themselves to be touched by humans, a behavior first reported in 1976. After whaling, whales became friendly to passers by and have even been known to come close to coastline as gentle giants roaming shallow waters

They may even be known as the friendliest whale of all.

Can you interact with whales?

Despite the gray whale being the friendliest of the gentle giants, it is important to take this into consideration: Generally, swimming with whales is illegal, dangerous and a bad idea to approach this large marine mammals. It is even worse to go close to their calves. Mothers are very protective over their calves.

Whale watching has become an important recreational industry in several communities along the North American coast from British Columbia, Canada, to the gray whale populated waters of Baja California, Mexico.

Whale watching along this route may lead to disturbance and affect gray whale behavior and therefore it is of utmost importance that tourists and operators practice sustainable methods of tourism.

How to practice ethical and sustainable tourism :

#1 Where to see gray whales in Baja California Peninsula, Mexico

#2 Where to see gray whales in California

Best time: California, your best time to spot gray whales and orcas is December to May.

#3 Where to see gray whales in Oregon

The most common whale off the Oregon coast is the gray whale. In addition to the approximately 200 resident gray whales that live nearly year-round off Oregon, a winter and spring migration brings a magnificent number of up to 18,000 gray whales along the coastline.

For some of the biggest views in the state, Cape Perpetua State Scenic Area is the place to recommend uninterrupted views, especially for breathtaking whale-watching!

#4 Where to see Gray Whales in Canada

The reach of the gray whales in Canada: Coast of British Columbia to the top of Alaska. The west coast is most famous for viewing the gray whales as they migrate close to the Vancouver Island shore in the spring and fall. On a calm day it is possible to watch whales pass by from the many beaches and trails that extend along much of the coast between Ucluelet and Tofino.

#5 Where to see Gray whales in Alaska

During summer, Gray Whales be found almost everywhere along Alaska’s coast, from Southeast to the Bering Sea, including Gulf of Alaska areas close to Anchorage.

Summary on where to see Grey Whales

Has this whale left you in its awe after learning about its incredible migration, friendly nature, and triumphant growth in population after a history of harpooning? These gentle giants are a privilege to witness along their annual migration.

May we continue to celebrate and acknowledge how special gray whales are, following steps to make sure activities of whale watching are always sustainable and ethical.

If you are an avid whale watcher and enjoyed reading about the best places to see Gray whales, have a look at our whales category that features blogs about all Whales, Fin and Orca Whales.

Revealing all the best tips and secrets about when and where to see these whales of the world! Enjoy! 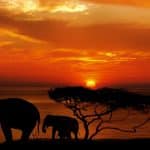