Welcome to the Top 10 Cutest Fish in the World!

Nature has proven to be the most artistic creator, especially in marine life. The aquatic world has the most majestic creatures in the world, many of them are still undiscovered.  Every now and then there is a discovery of a new creature with unique abilities which leaves us in awe of nature’s creation. The marine world comprises a variety of species.

Every fish is different in terms of physical appearance and mental abilities. There are several attractive fish in the sea that leave the human eye in admiration. Small fish are a cute creation of nature usually placed in aquariums to enhance the interior of a house. These adorable fish adds light to a small setup of the aquarium at home.

This article will educate you regarding the top 10 cutest fish in aquatic life from around the world. To know more about these creatures, continue reading.

Top 10 Cutest Fish Around The Globe

As discussed above, there are many species of fish living to date, all these species are classified into various categories and subcategories depending on their mental and physical traits.

Following are the top 10 cutest fish in the world along with their unique qualities and appearances. 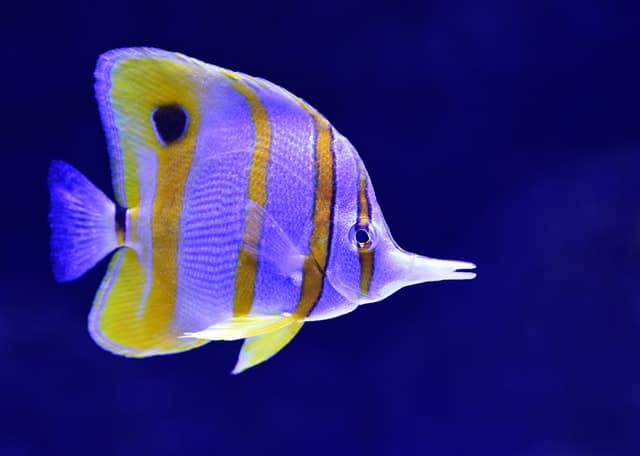 The butterfly fish is a bright-colored fish that is mainly found in black, white, yellow, red, orange, and blue colors. They have a remarkable pattern on their bodies. This fish can live up to seven years if in the wild.

Butterfly fish have a hundred and twenty-nine species. These fish can grow up to twelve to twenty-two centimeters in length. Few other species can look like lined butterflies, also it can grow in length of up to thirty centimeters.

The butterfly fish belongs to a group of freshwater fish family Chaetodontidae. They are mainly found in the oceans of the Indian, Atlantic, and Pacific regions. It’s a freshwater fish.

This fish can be placed in a large aquarium consisting of seventy-five to hundred and fifty gallons of water. This fish likes to swim in open spaces.

If placed in an aquarium, add rocks and stones to the aquarium where they can hide and play. The diet they consume is normal aquarium food.

Fancy guppy is also recognized by the name of rainbow fish. It comes in beautiful color patterns which are an absolute eye-catcher. Guppy fish comprises three hundred species.

Their growth highly depends on the area, if they are placed in a confined space they will grow less as compared to being placed in freshwater such as a river.

It is a popular freshwater aquarium fish. They originate from South Africa. They are highly flexible species that can survive in different environmental conditions. Their lifespan ranges from one to three years.

They are an excellent choice of fish to be placed in an aquarium as they enhance the beauty of it. They should be kept at temperatures ranging from twenty-two degrees centigrade to twenty-seven degrees centigrade.

Also, they enjoy dried vegetables and frozen worms for their intake.

These are attractive species of fish having blue, yellow, green, and red color combinations. Females who are in their breeding season portray a very attractive and bright cherry-red color on their bodies.

These fish can grow in length ranging from seven to ten centimeters. Females are smaller than males and have big round stomachs. The belly is bright colored in shades of red and purple, especially in the breeding season.

They are mainly found in the mouth of the Ethiope River near the Niger Delta. There are a variety of water conditions in that region, where the water is slightly alkaline. They prefer living in dense vegetation areas with a life expectancy of five years.

They mostly swim at the bottom of an aquarium in a thick vegetation area. They need to place in a large aquarium that can accommodate a minimum of twenty gallons of water.

They grow best in slightly alkaline water. They are omnivores therefore they can consume both plant and animal-based feed.

Betta fish are also known as Siamese fight fish which means fighting for life. These fish are sensitive and very beautiful with vibrant colors making them undoubtedly the cutest and most striking fish.

They are found in still ponds and slow-moving streams.  Their life expectancy is from two to five years.

These fish are sensitive and only female betta can be paired with submissive fish breeds in an aquarium with a lot of hiding spaces. If they are being violent with other fish then they need to be placed in a separate space.

Betta are carnivores in nature and therefore require an animal-based diet. They can survive on plant-based food for a while but will not survive for long due to nutritious deficiencies.

The name ‘regal’ speaks for itself as it’s a beautiful fish that has vibrant patterns in shades of blue, yellow, orange, and white. A real great part of the cutest fish! These color patterns are what sets an angelfish aside from all the other fish in terms of magnificence.

They can reach the length of twenty to thirty centimeters. They are usually found in groups having one male accompanying one or multiple females. If kept in wild waters it can have a life span of ten years.

The color of these fish varies from their geographical regions. For instance, the regale angelfish which belongs to the Red Sea and Maldives region has a yellow-colored pattern on its chest while the angelfish belonging to the Indo-Pacific region has a bluish-grey chest.

The regale angelfish is comparatively difficult to manage if compared with other species. To maintain a good aquarium environment, they should be placed in the tank first which enables them to mark their territory.

They are to be placed in a large tank comprising at least a hundred and twenty-five gallons of water with a lot of hiding spaces. They are omnivores, therefore, require an animal and plant-based diet.

This fish has a bright blue base with yellow and black patterns. The character ‘Dory’ in the movie “Finding Nemo” gained popularity in 2003. The fish was a blue tang.

If they are kept in wild water then their life expectancy is up to thirty years.

Blue tangs require a minimum of a hundred gallons of water with a lot of hiding spaces.

They become stressed if there are fewer hiding spaces in the aquarium. They are omnivores and feed on fish like plankton. The main source of their diet is consumed from algae. Therefore they will happily consume algae-based fish flakes.

These fish belongs to the Dragonet family and are one of the most exquisite creations of nature. Their vibrant color patterns set them apart from other sea creatures.

It has an electric blue body with bright orange and green print on top. This blend of colors is mesmerisingly eye-catching.

Mandarinfish can grow up to eight centimeters in length. The males are larger than the females consisting of a vibrant pattern of green and orange color combination. The life span of these fish is up to fifteen years.

These fish are carnivores in nature and are difficult to keep in an aquarium due to their diet necessities.

Once you overcome the obstacle of providing them with their specialized diet, they are easy to keep in an aquarium along with other non-aggressive fish species.

The temperature should range from twenty-four to twenty-seven degrees centigrade in an aquarium that can accommodate twenty-nine gallons of water and more.

This fish is also known by the name of Nothobranchius Rachovii originated from Mozambique. This fish has a unique and breathtaking physical appearance. They have a red base along with vibrant flashes of electric blue and turquoise. Can’t be missed on a cutest fish list.

These fish can grow up to 6cm in length. Males of such kind are larger and more attractive than females. They live up to a year, therefore, their breeding is very important. They attain maturity for breeding in a few weeks after being born.

Bluefin Notho is mainly found on the lowlands bordering the river. During the hot seasons, the water levels of such areas decrease.

These lands are mainly used by locals to cultivate rice. That time of the year is the kill fish season for this species and a few other kinds of fish in the lowlands of water.

Bluefin Notho can be placed in an aquarium with a temperature of twenty to twenty-four centigrade with light medium lighting.

They survive in slightly acidic water. They consume dried vegetables, and female’s appetite is greater than males’ as they produce eggs daily.

No list of the top cutest fish will be complete without sea horses. Many people aren’t familiar with the fact that they are also a type of fish. They are miniature and magnificent creations of nature. They are usually pink, yellow, grey, and orange.

They grow in length ranging from two to thirty-five centimeters. The male and female are set apart by the belly pouch of the males. This pouch is where the male fertilizes the eggs. In sea horses the male gives birth.

They are mainly found in tropical areas comprising shallow and salty waters. They use sheltered areas to form their habitat. Species of sea horses are found in Pacific waters from north to south America.

Sea horses can be placed in an aquarium having a capacity of forty to fifty gallons of water along with a height of at least eighteen inches.

Sea horses move up and down often rather than side to side. Therefore, they require vertical space in a tank.  They are omnivores and can last on both plant and animal-based food.

The clownfish is also known as anemone fish which is popular for its vibrant color in the shades of white and orange. This fish gained popularity in 2003 through the movie ‘Finding Nemo’. The main character of the movie was a clown fish named Nemo.

They are mainly found in the warm waters of the Pacific Ocean and the Red Sea. They usually reside in sheltered areas or anemones, which is a plant that blooms into a white-colored flower.

Clownfish can be placed in an aquarium comprising at least thirty gallons of water. They need a lot of hiding space to feel safe. They are omnivores. Therefore, they feed on both animal and plant-based food coming from algae.

If you want to keep these fish in a tank. You must maintain the desired temperatures for them to survive. Not only this, but they also require ample space to move around.

Many fish are shy and they need hiding spaces within the aquarium. Keeping all these things in mind, don’t forget to inculcate a good diet to meet their nutritional needs.

The above-mentioned fish are the cutest fish that can be found in the aquatic world. They are small in size but consist of a fine-looking exterior which is an absolute attraction to the eye. These fish are a true depiction of nature’s magnificent creations.

Since these adorable little fish are so compact, they can easily be placed in an aquarium. They all have their conditions and requirements to survive in a tank.

Once these requirements are met they can add exceptional color and beauty to the aquarium with their presence. If you want to explore further for fish that can be placed in the aquarium click here.

While there are many fish in the sea and all leave us in awe of nature’s magnificent creations. These cute little fish leaves the viewer mesmerized with their beauty. There are many species of marine life but the above-mentioned fish are breathtakingly attractive to the eye.