Welcome to Animals in Massachusetts!

Massachusetts is one of the most significant state in America. The state is best known for providing value education and a variety of wondrous animals. The provision of value education within the state needs no further elucidation, since Harvard university represents it.

But the lateral reason for Massachusetts’ popularity is a super-interesting topic to shed light on!

Massachusetts has been home to many amazing animals for hundreds of decades. Even as the industrial revolution largely impacted the state’s wildlife, the state has extensive wildlife to talk about and fetch several tourists every year.

We suggest you get some beverages and snacks to enjoy this exciting read fully, so let’s begin to explore animals in Massachusetts today.

Read the entire article about Animals in Massachusetts or jump to any section you like!

Where can I find the best wild animals in Massachusetts? 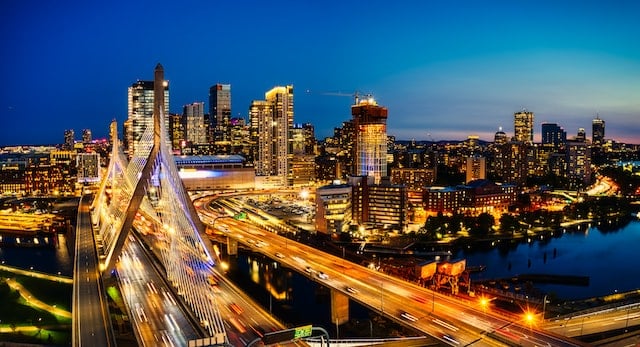 Despite the Industrial Revolution, Massachusetts has managed to preserve many forests. In fact, a survey suggests that it has more than 200 state forests, reserves, and parks that have been natural refuges for wildlife.

Notably, with these vast refuging options, this state offers a variety of exciting and untouched wildlife. Precisely speaking, great locations near the coast feature some of the best marine habitats in the country. Read about hawk species in Massachusetts.

Here is a list of the best places to see the wondrous animals in Massachusetts today in all their glory.

Notably, the place is officially known as Gerry E. Studds Stellwagen Bank National Marine Sanctuary. Also, the place is considered an ideal site for spotting whales. Overall, this particular region of Massachusetts is best known for its wondrous species of marine life. For this reason, the place is no less than a treasure trove for people who love exploring marine life.

More preferably, it is home to migratory birds, including the scarce species of water birds. Overall, experts believe that around 370 species of birds are native to this place.

Other than that, it also features muskrats, rodents, white-tail deer, foxes, weasels, herons, bluebirds, finches, and waterfowl. Also, the place is no less than a complete picnic package offering ideal spots for hiking, trekking, fishing, or even hunting.

The river is located about 25 miles west of Boston. The place includes a beautiful mingling of hardwood forests, wetlands, and lush green meadows. Above all, the Assabet River National Wildlife Range is best known for conducting the breeding process for migratory birds.

Of all migratory birds, the blue heron is the most considerable one. Besides birds, the region is also a refuge for minks, badgers, turkeys, foxes, deer, beavers, rodents, and other mammals.

The Most Dangerous Animals in Massachusetts Today

Having said earlier, Massachusetts is best known for its wildlife wonders. Owning a diversity of animals is a significant specification of this particular state of America. Therefore, experts surveyed Massachusetts wildlife and categorized its vast range of animals into different groups.

Among these classifications, they named one group as the most dangerous animals in Massachusetts. The animals in this particular group are generally seen to occupy remote areas such as thick forests, woodlands, or deep oceans.

Notably, very few animals from this particular group have been observed to kill human beings. Still, if you are a staunch tourist or love to explore wildlife, you must be aware of Massachusetts’s most dangerous animals.

In addition, before planning a trip to any such places, it is strictly advised to have necessary weapons or tools as your mandatory life belt. Here we have gathered a list of the most dangerous animals in Massachusetts today that may risk your safety.

Please note that the list only includes the animals that directly threaten human lives. However, you may also encounter less dangerous animals that may cause slight illness.

Let’s take a dive into the most harmful animals in Massachusetts!

The timber rattlesnake comes at the top of our picks for the most dangerous animals in Massachusetts today. This particular species of snake is native to Massachusetts.

However, it is only present in some areas of Massachusetts, e.g., Holyoke Mountain Range and the Blue Hills Reservation in Milton. Apparently, they are witnessed to have a heavy body just like other pit viper family members.

Notably, there are only five timber rattlesnakes in the state today. Still, we cannot overlook the danger it brings to human life.

Being the most venomous snakes containing potent venom to kill a human within a few minutes, they are fairly categorized into the group of most dangerous animals. That’s why the timber rattlesnake bite is considered a severe medical emergency.

Next on the list is the Eastern Copperhead – a non-aggressive species of venomous snakes. Similar to timber rattlesnakes, this pit viper member also has a heavy body. However, it also owns copper-colored splotches scaling from a lighter tone to darker.

Nonetheless, its distinctive appearance and hourglass-shaped body markings are its unique feature or identification mark.

The bites of Eastern Copperheads can potentially be lethal, causing death. However, their venom is comparatively less venomous than timber rattlesnakes. In addition, the copperheads are non-violent and non-aggressive.

The Northern Black Widow Spider, aka Latrodectus Variolus, is another most dangerous animal that you may encounter in Massachusetts. Generally, they are present in the Eastern US, southern Canada, and Florida. However, they prefer flying to Massachusetts in the summer.

Notably, the spider shares many of its physical attributes with its southern cousin. They both not just share physical attributes, but their painful bite is also similar. The female Northern Black Widow Spider has a comparatively more venomous bite. It’s because the venom is more lethal than its male counterpart.

The black widows are medium-sized spiders having glossy black-colored abdomen and large red circles on their backside.

The next is the North American Black Bears, who are not intensively aggressive. Instead, the black bears are shy since they are solitary animals who love to live alone.

These lumbering giants turn into aggressive predators if they feel threatened. Typically, they are medium-sized bears with a diversity of skin color. Though they are named black bears, they also exist in other colors like blue, gray, chocolate brown, or cinnamon brown.

The bites of these Jellyfish turn fatal if not treated instantly and properly. Among the common symptoms of jellyfish bites, burning, swelling, and slight numbness are essential.

Sharks are another predator that you may find in the deep waters of this region. Though shark attacks are rare, they can be dangerous ones. The best practice to avoid shark attacks is to avoid swimming with wetsuits or prevent wearing any jewelry while swimming.

There is no doubt that Massachusetts is the biggest hub for different species of bees, including bumblebees, hornets, European honeybees, and carpenter bees. Another notable bee species is yellow jackets, whose stings are 70% more common than the others.

Mild to severe pain is the most potential symptom of Massachusetts bees. However, an allergic reaction to their sting has also been noticed. The ratio of this allergic reaction is just 5%, but there is a higher chance of its being fatal.

Since Massachusetts is home to many unique species of animals, few species are closer to extinction. That is why the respective authorities have shortlisted a list of certain animal species and named them the Endangered Animals in Massachusetts.

Notably, many different factors are contributing to their extinction risk. Nonetheless, the animals included in this list are currently protected and rescued following the Massachusetts Endangered Species Act.

A vast number of nocturnal bats species are enlisted to the list of endangered animals. Among those, the brown bat, northern long-eared bat, eastern small-footed and tri-colored bat, and Indiana bat, are included.

Please note that the most significant reason for their extinction is outspread of a fungal disease known as white-nose syndrome. Research tells that the disease was first brought up in Europe. The fungal attack causes an infection in the colonies and spreads throughout the body leading to premature death.

The saltmarsh sparrow is mainly native to the Atlantic coast. This New World sparrow was primarily considered a relative of a sharp-tailed sparrow. Due to that, they are now known as saltmarsh sparrows.

Also, this particular species of sparrows is at a high risk of extinction. And the reason behind its rapid extinction is habitat loss. They are medium-sized sparrows with slightly longer tails and a strong body.

The following endangered animal from Massachusetts wildlife is Roseate Terns. They belong to the genus sterna. Their name ‘roseate’ was given to them due to their pink breast during their breeding phase.

Moreover, these are medium-sized seabirds normally present on the northeastern coast of the United States. A black-colored cap on their heads and a pink spot on their breast give them the most captivating outlook.

But unfortunately, this beautiful seabird is becoming extinct sooner or later. The Roseate Tern population decline was first observed in the late 19th century. It was due to plume hunting.

However, that decline was later stopped. Still, this particular species of seabirds is labeled an endangered animal under the Endangered Species Act (ESA).

Next, we have a most venomous snake species, which is also categorized as the most harmful animal in Massachusetts. Notably, they are among the rarest animals in Massachusetts, as only five timber rattlesnakes are still left.

Due to the very few alive timber rattlesnakes, the Massachusetts Wildlife administration has added them to the list of Massachusetts Endangered Animals.

Since they are one of the most dangerous animals, there might be a chance of killing them to save human life. To eliminate that risk, the government has also strictly prohibited killing, harassing, or even chasing them.

Initially, they are native to Massachusetts, mainly found in just two regions of Massachusetts: Holyoke Mountain Range and the Blue Hills Reservation in Milton.

Experts believe that whales are one of the most critical marine mammals as they are the key to a healthy marine environment. Generally, thirteen major or most significant species of whales exist on the planet- Earth.

Sadly, seven out of thirteen are marked as endangered marine animals. It is essential to mention that even a slight change in the ratio of endangered species may impact the marine environment badly.

Most importantly, the North Atlantic right whale is one of the rarest species of whales that belong to the genus Eubalaena.

What is Massachusetts’s famous animal?

In addition, the Official Cats are the tabby and the state mammal called the Right Whale is important in state whaling industries.

What is the Massachusetts state dog?

The official dog of the Massachusetts state is the Boston Terrier.

To conclude, we can rightly say that Massachusetts is the biggest hub of wildlife wonders as it’s so brimmed with wondrous animals.

It is a treasure-trove of several beautiful species, from woodlands to submarines. And that’s no lie! Also, it is a favorite spot for many tourists, ecologists, and wildlife biologists for study, exploration, and research purposes.

But unfortunately, some unique animals are at higher risk of vanishing. However, the respective administration of Massachusetts is working by leaps and bounds to protect endangered animals.

Have a look here if you want to learn more about Wildlife in the USA. You might also like to read about Animals in Connecticut.