Have you ever seen Cockroach Babys ?

Baby cockroaches are called Nymphs. They are tiny insects that love munching on your leftovers in the kitchen. Cockroaches are the most non-picky eaters that you will find around your house. They eat anything from sugary foods, bread, hair, and even decaying matter!

Nymphs like to live in places that are warm, moist, and away from sunlight. This is why you mostly find them residing in old cupboards, space beneath your cabinets, and the basement.

But let’s be honest, nobody likes cockroaches living in their homes. People usually find them filthy and disgusting and use different techniques to eliminate them. And if they fail, they try to kill any roach on sight.

Surprisingly, we don’t know as much about the diverse variety of roaches as we should. Cockroaches include multiple species that primarily don’t desire to share space with us, and the ones that do colonize our homes have a few special kinks that we usually miss.

Cockroaches aren’t the only bugs living in our homes. Many bugs and insects that look like cockroaches make their way into our houses and apartments. So it is expected that you might confuse harmless insects for harmful ones or find a dangerous bug and be a bit skeptical.

Nymphs are insects that are considered a part of the harmful category. Hence, you must think on your feet if you ever spot one. 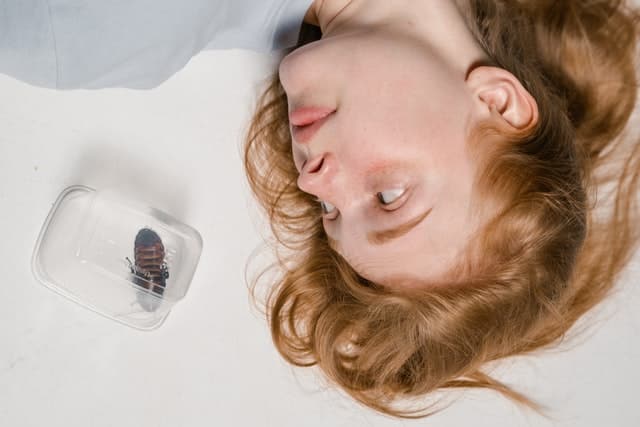 Approximately thirty different cockroach species can occupy places in our homes. They differ in features, but they have some similarities that help in identification of their species.

You might be familiar with one or two roach species that you usually see around. But it is crucial to know that out of the vast species, only a few of these roaches fall under the category of harmful pests.

All baby cockroaches have the following characteristic features:

8 Surprising Facts About Cockroach Babys That Will Shock You:

Mentioned below are eight facts you may not know about baby cockroaches.

Science has so far discovered around four thousand cockroach species, out of which only thirty fall under the category of pests, and the majority don’t have anything to do with us humans.

The most dominant cockroaches occupy wild habitats like decomposing and rotten tree logs in jungles or wet and warm cave floors.

It is, of course, a fact that out of these thirty species of cockroaches, some of them have carved out an impression on human lives.

The University of Florida Institute of Food and Agricultural Sciences states that the German cockroach, in specific, is the cockroach that has a lot to do with giving all the other cockroaches a wrong impression.

Cockroaches are usually not evil and do not suck blood like most insects and are not directly associated with any critical cause of a disease but can act as carriers and aid in the spread of germs from one place to the other like houseflies.

Pest cockroaches may lead to significant psychological stress for people who have insect-related phobia. Besides the stress it may cause, cockroaches present in large numbers can trigger asthmatic and allergic reactions in a few individuals.

Did you know cockroaches inspire and expel air through tiny holes around their body?

Baby cockroaches do not have a nose, mouth, or well-formed brain to regulate their breathing.

Nymphs do not require their heads to stay alive and have the potential to survive up to one month without consuming any food and one week without water.

Few cockroach species can also regenerate their limbs. They can fit in small cracks and spaces by compressing their bodies to pass through tiny spots even as low as 0.30 mm wide.

The great thing about this circulatory system is that the blood doesn’t flow with much pressure inside the cockroach’s body and just clots at the neck.

A few years ago, people used personalities to refer to human beings. However, most researchers have concluded that apart from humans, most animals and insects also show considerable differences in their personalities.

Even cockroaches in most studies have personality types and varying levels of characteristics like behavioral signatures.

A study published in 2015 in the Proceedings of the Royal Society B revealed that some researchers found that American cockroaches are more likely to explore new places and be bolder than other species that tend to be shyer.

Just as in the case of humans, the more like-minded cockroaches choose a shelter site together that provides them an edge in certain situations. When in a group, they can find a good quality shelter more efficiently than individuals searching in a natural setting.

Cockroaches are said to be social insects, but they don’t prefer to live in colonies under the rule of a queen, unlike the other social insects like bees and ants. Instead, they often form more democratic clusters, all of which can reproduce.

It is shocking that cockroaches, based on their collective effort to choose shelters, offer an excellent example of democracy in the kingdom Animalia.

For example, in a study of German cockroaches, the scientists concluded that they divided themselves into specific subpopulations according to the available shelters in a group of around fifty roaches.

But they could also change their groups and reorganize themselves as soon as the conditions were subject to change. This is how these cockroaches maintained a harmonious balance between cooperation and competition.

The hatching of the cockroach eggs occurs because of the pressure buildup because the baby nymph or hatchling inhales the air. When the eggs crack, the nymph appears as a white-colored tiny insect from the egg case.

Although it is white at first, it gradually hardens, and the color becomes darker only in a few hours. The time duration for a nymph to develop into an adult depends on the cockroach species. Some cockroaches become adults in a few days or weeks, and some even take up to a year.

Ecdysis is the process of shedding old skin. With each gradual molt, the nymph darkens and changes its color.

The outer covering of the cockroach, called the cuticle, prevents the growth of the roach’s body which is why shedding the skin is the only mechanism by which the nymph can grow.

During ecdysis, the older layer of cuticle cracks, and the nymph emerges from that covering. Many baby cockroaches also die or become the prey of other insects if they don’t act fast during this stage or fail to get out of their old cuticles.

If we talk about the german cockroaches, they molt around six to seven times during the nymph stage. After the last molt, the nymph is termed as an adult with wings and a fully functional reproductive system.

Baby cockroaches are amazingly fast organisms in terms of speed and reflexes. They are well known for squeezing themselves through small spaces and hiding to escape our attempts to kill them.

According to scientists at the University of California-Berkeley, baby cockroaches can sprint with the same speed through quarter and half-inch gaps by relocating their legs to the side. It can also bear weight nine hundred times greater than its own without wear and tear.

A team of Berkeley Scientists mimicked a robot that had the same capability as a cockroach to squeeze and pass through small spaces since this quality of roaches is excellent for specific rescue missions.

Keeping these characteristics of cockroaches in mind, another group of researchers in 2019 published a study about a new roach-like robot, which imitated a few critical features of baby and adult cockroaches.

This miniature robot is the fastest out of all insect robots and runs at approximately twenty body lengths per second, identical to the speed of a living cockroach. It is incredibly lightweight and weighs just a tenth of a gram but can easily bear around sixty kg.

Unlike the ordinary pest cockroaches that can be found all around the world, many species of wild cockroaches are at a high risk of being endangered.

Nymphs of these cockroaches are present but rarely seen due to minimal natural range, afforestation due to human development, and climate change.

Researchers have classified The Lord Howe wood-feeding cockroach as an endangered species in Australia, where it is extinct on the main island and is only present on the Lord Howe Island group.

The International Union for Conservation of Nature (IUCN) has also listed two more cockroaches commonly found in East Africa under threat of endangerment.

This phenomenon called Parthenogenesis is a standard mode of reproduction in a few cockroach species. It is a type of asexual reproduction in which young insects are born from unfertilized eggs.

If we consider the American cockroach, it is one of the most common cockroaches found across the globe that reproduces by Parthenogenesis.

The other dominant species of worry include the German, American, White, brown-banded, and Oriental cockroaches, which we have mentioned in this article below.

This cockroach is almost oval and has a flat, hard-shelled body, six spiny legs, and a well-demarcated and separate head. Upon close observation, you can also identify segments and horizontal bands along its body.

The nymph has two long, thin antennae similar to the adult roach but does not have wings. The appearance is usually dark brown, with a slightly lighter shade in the body’s center. The brown color of the nymph gradually turns darker with each molting cycle.

An American baby cockroach is flattened and oblong with six spiny legs and a pair of long tin antennae. They are reddish-brown, with red producing an edging effect on the segments on the cockroach’s back.

The body has a covering of hard shells and is divided into three sections. Like the adult roaches, the nymphs also have appendages at the base of their anatomy but, unlike adults, have no wings.

The American baby cockroach has a size similar to or smaller than the diameter of a penny, usually under two cm, and grows on average to not more than four cm long.

The baby oriental cockroach has six spiny legs, two medium-length antennae, and a hard-shelled body with a shine. They have appendages similar to the adult Oriental cockroaches but lack wings.

Baby Oriental cockroaches are usually around six mm before their first molt, approximately the same size as a grain of rice.

Baby brown-banded cockroaches are oblong, and their color ranges from tan to dark brown; and can be distinguished from other species of roaches because of the presence of two thick brown bands that are present longitudinally on their abdomens.

Like all the species, the baby brown-banded cockroach also has six legs, a pair of long slim antennae, and a hard-shelled body.

How big is a baby brown-banded cockroach?

The nymphs, like the orientals, are about three mm before their first molt, approximately the same size as a grain of rice.

Unlike the other cockroach species mentioned in this article, you rarely encounter a white cockroach. These nymphs have either newly hatched from their shells or are in the middle of a molt.

At this stage, the cockroaches look very similar to a worm, a larva, or even a strange cockroach that lacks wings.

Cockroaches are organisms that live worldwide, in a wide range of places, irrespective of the location or temperature of the region. They can survive in shallow temperatures without any issue.

They are hard-core insects and have dominated the earth for thousands of years. These rough and tough insects can stay alive and function for months even if they don’t have access to food or water.

Do you like this article? We have many more for cute animals, endangered animals or the biggest animals – have a look! 🙂