Welcome to the Top 10 Best National Parks In The United States.

The United States has many beautiful scenic parks within its geographic boundaries. These parks add attraction to the land. Not only this, they are an exceptional way to preserve the natural beauty of that area.

An area is designated by the government to form a national park in that area to preserve the natural scenic beauty and history of that area. The landscapes of the national parks are preserved in their natural state.

National parks are also used for public recreational activities. It can be a place for enjoyment for history lovers.

There are various reasons why national parks can benefit the government. It can play a huge role in enhancing that area’s economy by attracting tourists and the general public. Its natural beauty and landscape can be an attraction for many.

Few national parks are built to preserve the wildlife in that area keeping landscapes and natural greenery intact. Therefore no harm is done to the habitats of the wildlife.

Extra measures are taken to make sure these animals are not harmed by the tourist. Hence, the tourist and visitors are allowed access to a specific area of the park only.

Another reason for national parks is to preserve their national history. There may be monuments, locations, and various symbols which depict an important historic era of national history making them an attraction for tourists.

The United States has several breathtaking national parks within its geographic boundaries. Below is a list of the most attractive and majestic national parks present in the US. 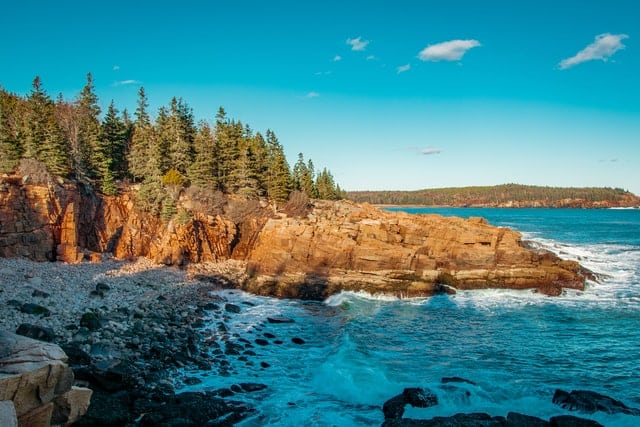 Acadia Park is the first national park which is situated across the Mississippi River. The land was donated by the locals to preserve its raw and rugged coastline. This land was then declared a national park in 1919. The land comprises 47,000 acres which include forests, lakes, and mountains.

This land comprises the highest mountains of the United States situated on the Atlantic Coast. It comprises a U-shaped valley along with cobbled beaches.

This national park consists of mountains, lakes, coastlines, beaches, forests, streams, wetlands, and meadows. The versatility of nature existing in one place also increases the habitat of various animals.

The climate here has many variations. There are summers with temperatures ranging from warm to hot which gets humid at times. On the other hand, winters are cold dropping to extremely cold temperatures.

The summer season lies between May to September when July is the hottest month. The winter season ranges from October to April in which January is the coldest month of all.

Many recreational activities are available at Acadia National Park for tourists and locals during the autumn and spring season.

Recreational Sports like swimming, canoeing, and kayaking is also available at ponds, lakes, and beach in the park. A great one from the Top 10 Best National Parks In The United States.

This land is located on the southeastern side of Utah. It comprises a geographic area of 73,000 acres. It consists of about 2,000 red rock arches in the area with a minimum opening of three feet. This land was labeled as a national park in 1971.

The Arches Park’s climate is cold and dry. It annually receives rain of about 250mm. Even in these dry and cold climates, an abundance of plants and animals reside in this area.  The soil of this land quickly absorbs and stores water which aids in the growth of complex plants in this area.

This park is located near the Cuyahoga River close to Cleveland in Ohio. It consists of many scenic visions and attractive landscapes along with beautiful rolling hills and forests. It is the only national park present within the boundaries of Ohio.

The climate here in summers is mostly warm and cloudy with high humidity. While the winters are relatively cold. The temperature often falls due to snow and cloudy weather in the winters. During both seasons, thunderstorms are quite common.

Cuyahoga Valley has two major urban areas along with condensed roads and small towns. It was feared the locals will affect the beauty of the national park through their transition.

Glacier national park has the most breathtaking landscapes located on the northwest side of Montana. The geographical area of the land is one million acres. It has the most scenic view of glacier valleys, meadows, magnificent peaks, and lakes. The natural beauty of this area is heaven for all nature lovers.

This national park consists of a variety of plants and is a house to multiple species of animals. Wild animals from grizzly bears to the wolf, mountain goats, and cows have formed a habitat in the forests of Glacier national park. Various types of plants grow in this park.

This park comprises landscapes having different peaks. As the height increases the temperature drops. A variety of temperatures is experienced in this park due to the vast geographical area. Therefore, temperature changes rapidly from one area to another. The winters here are long and cold.

Hiking is a popular recreational activity in these national parks. Long lengths of tracks are available from north to south with multiple routes.

Low altitude routes can be opted if high elevation routes are closed due to snow. Historic wooden tour boats are also available to explore the scenic view of the valley in the lakes.

Grand Canyon is contemplated as a wonder of the world. UNESCO has labeled it as a world heritage site. The park is situated in northwest Arizona and consists of around 1200,000 acres of geographical space.

Many tourists come all year round to experience the grandeur of Grand Canyon national park.  It is a colorful formation of nature’s creation that leaves the viewer in awe. The geographical area of this park is massive. It is 18 miles wide, 277 miles, and 1 mile in depth long.

Among the 10 most beautiful parks in the United States, the Grand Canyon is the second most popular park in terms of tourist attraction. Millions of people visit this park annually.

Many recreational activities are available here such as hiking on various trails, exploring walking tours, and experiencing private flyover tours through helicopters.

This park is situated on the northwestern side of Wyoming. The geographical area covered by Grand Teton national park is almost 310,000 acres.

It comprises majestic beauty scenic views of valleys, lakes, forests, and mountain peaks. It was categorized as a national park in 1950.

Grand Teton Park is named after the highest mountain in its geographic boundaries. This park not only consists of beauty but ancient history as well which goes back to 11,000 years, which is a reason for being part of Top 10 Best National Parks In The United States.

Also, it is home too many species of wildlife such as elk, eagles, bison, moose, and much more.

The temperature here during the summers is sunny and warm while the winters are snowy and cold.

Winter-based recreational activities such as skiing and snowshoeing are carried out during winters.

This national park houses the oldest mountains in the United States. It was named a national park in 1934. It is spanned over two states Tennessee and North Carolina with a geographic area of 500,000 acres.

It is the most famed national park among the 10 most beautiful national parks in the United States in terms of tourism.

Great Smokey Mountain national park not only houses the oldest and highest mountain but also consists of various vegetation spread over the mountain making them an attraction to the eye.

It has dense forests, lakes, waterfalls, and more. Everything a nature addict wants, they will find it here. Also, this park was used to shoot a hit TV-Series of Disney in the 1950s.

The weather here is of two types; temperate oceanic and tropical humid. The summer season is lengthy and warm with high humidity. On the other hand, winters are short, wet, and extremely cold.

This national park is a major tourist attraction in the United States. It plays an important part in the economy as a lot of income is generated through tourists.

It comprises forests and about forty glaciers that make up an ice field. It is located in Alaska, in 1980 it was indicated as a national park.

The geographical area of this park is about 600,000 acres. Most of this area is covered with ice due to the presence of multiple glaciers.

The park comprises forests between the narrow spaces of mountains. The park houses many marine animals such as moose, bears, sea otters, killer whales, harbor seals, and more. The glaciers in this park portray a breathtaking view of nature, leaving the viewers in awe.

The climate here is mostly cold from December to May. The coldest month is March in this region. Climate change is affecting the glaciers here, there has been a decrease of 21 meters in the height of glaciers.

It is a hotspot for large cruise ships. These tours provide view access to marine life and landscapes. It is a great spot for the adrenaline junkies to do adventure sports such as kayaking and hiking.

The Olympic national park is located in Washington on its northwestern end. This land covers a geographic area of one million acres and was stated as a national park in 1909.

It was later redesigned to ensure ninety-five percent of the land is segregated into the wilderness. This is the largest area of wilderness in Washington.

The scenery of this land is majestic. This region is home to various animals and a vast range of marine life including sea otters, whales, and dolphins. It has a wide spread of vegetation comprising many types of plants.

This park consists of many high elevated mountains. It is positioned on the central-north side of Colorado. It was indicated as a national park in 1915. The geographical area of this land is around 250,000 acres.

Rocky mountain national park is home to a variety of landscapes such as alpines, lakes, forests, and diverse plant life and wilderness. It houses a variety of animals such as small butterflies, various birds, reptiles, and many mammals.

The summers are pleasant but the winters are tremendously cold with temperatures decreasing below zero degrees Celsius. The overall weather in this region is cloudy all year round.

Recreational activities offered at this park are various hiking trails with exceptionally beautiful scenic views. Routes are provided for hikers to hike to the highest mountains in these regions. Fishing is also allowed in a few lakes.  During winter, sports such as snowshoeing and skiing are practiced.

Above mentioned are the 10 most beautiful national parks in the United States. They all have unique properties which set them apart from one another but breathtaking sceneries are a common denominator.

All these national parks contribute to the US economy. The income is generated through tourists who visit these places annually. They are a great way to preserve national history and provide habitats to many wild animals.

National parks are open to the public and offer various activities to attract tourists. These activities consist of hiking, bicycling, training, and walking on the tracks.

Few seasonal winter sports are also offered for all individuals seeking adventure. Campsites are also available in these parks, you can pack up your essentials and enjoy the outdoors in these camps.

You can use this guide to pack your essential items while visiting a national park. If you want to read more about North America or the Animals in the USA you can do so also in our page.