Did you know flying spiders do not have wings? It’s the ballooning movement that makes them look like they are flying. These flying spiders are biologically renowned as Larinioides sclopetarius.

Interestingly these animals have several names, such as gray cross-spider and bridge-spider. Various studies and research reveal that no such spider species have wings.

But some spiders have modified themselves and like to live on the trees rather than on the forest floor. Such spiders have adapted ballooning locomotion, which is why they appear as if they are flying among the thick forests.

Here are some staggering facts discussed in detail in this article. These exciting flying spiders 11 facts would give you goosebumps.

They have some exclusive facts that differ widely from other living organisms. The most astonishing facts are explained below.

#1 Flying Spiders Have Venom Which Is NOT Poisonous 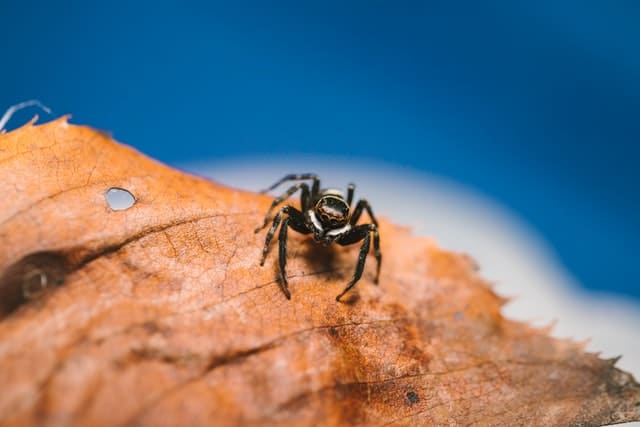 The first fact about the flying spiders is that most species are venomous, while others are not. But the venom of these bridge spiders is not poisonous at all.

If they bite humans, it’s not lethal; in fact, it heals quickly. Flying spiders use their venom whenever they feel danger and also for prey. Whenever they are disturbed, or their web is damaged, they use their malice against the predators.

As we see that mostly the venom is poisonous, but flying spiders differ from other creatures in this sense. This fact clears the concept about the danger of flying spiders that they are not harmful at all. They do not bite humans even when they reside near human populations.

#2 They Have Wingless Nature; They DONOT Have A Flying Organ

Although gray cross spiders are famous as flying spiders, it is worth mentioning that they do not have wings like birds or insects, nor do they possess any organ that helps them in flying.

You may wonder how they fly if they do not have wings. It is fascinating that flying spiders produce long silk threads that play the most crucial role in their movements.

The silk lets the flying spiders move freely, which is why these creatures are associated with living organisms that can fly without wings.

Due to their wingless nature, flying spiders sometimes appear wild when seen for the first time. The silk is very thin; therefore, at first sight, it seems like the spiders are flying without the help of silk strands.

The most outstanding fact about flying spiders is that they can cover massive distances. They do not limit themselves to a habitat. They keep moving because of their ability to secrete such silk that interacts with the electrostatic effect and lets the spiders move.

Did you know? Some spiders fly as high as 16,000 feet above sea level.

If you are arachnophobic-having an utmost or irrational terror of spiders, you may feel this fact as an alarming situation for yourself.

But do not panic because these spiders do not cause harm to humans; therefore, if you find them anywhere, look at them as they are the unique creatures on Earth.

#4 Trichobothria Helps Them Move In The Electric Field

The body of flying spiders is covered with numerous hairs and spines. These spines and hairs have functions such as defense, locomotion, capturing the prey, sensing the surroundings, and various other purposes.

Out of all the hairs on their body, only the trichobothria were moved within the electric field produced.

At the same time, all the other types of hair and spines did not show any movement. Erica Morley explains further how Spiders Fly On The Currents Of Earth’s Electric Field.

This movement is due to the electric field because the Trichobothria are specialized hairs (found in many insects) that detect the airborne electrical charges, currents, and vibrations in their body.

Another interesting fact about flying spiders is that they live one and half years on average. And in that duration, the female flying spiders can produce fifteen egg sacs.

These egg sacs are a bag-like structure that contains eggs. Each sac may have several to thousands of eggs.

The egg sac’s purpose is to protect the eggs the female spiders lay. It is worth mentioning that when the female flying spider lays the last egg sac, it dies. The habitat does not affect the average lifespan of the flying spiders.

#6 Flying Spiders Are Vibrant And Lively

Another fascinating fact about bridge spiders is that among all the spider families, they are the most active spiders that do not limit themselves to a place. Flying spiders have adapted several features and modified their lifestyle to enhance their living.

Flying spiders are most commonly found in the northern continents such as Asia, Europe, Australia, Africa, and North America. In North America, they are mostly found near lakes. Their diversity and distribution are immense throughout the world.

The most common cause of this strange behavior is that the females are larger than the male flying spiders. So whenever the female partner is hungry, and they do not have prey, they eat their male.

There are various theories and hypotheses about this fact. And all explain different causes of eating the male partners by the female flying spiders.

From the preceding facts, it is entirely clear that flying spiders are not lazy at all. And they do not want to limit their lives to a specific area. Therefore they keep on moving. They love to explore new places.

They are commonly found in forest trees, regions near lakes, areas near human populations, and other regions.

The particular reason for their habit of exploring new areas is because they mostly avoid competition. They do not want to live in those regions where they need to compete for food and shelter. Also, they move to get exposure to more powerful light.

We already know that the female flying spiders eat their male partner for various reasons and in different life stages. But it is also observed that sometimes in a population, the males exceed the females.

The reason for protandry is that they are primarily monogamous (one male couple with only one female) or because their mating is random. It leads to the conversion of flying spider males into females.

Another fact explains that their secrete silk and make a web parachute. This web parachute helps them to fly throughout the environment.

The possible reason for this may be that dwelling on trees is far better than on the floor because they protect themselves from becoming the meal of other creatures easily on the forest floors.

It is the most fantastic fact about flying spiders. Kiting (ballooning) is when the flying spiders release a long silk thread into the air.

As a result, the strands gain electric current and become charged in the air. This electric field raises the flying spiders in the air and lets them move around actively.

Whether young or grown up, all undergo ballooning and appear unique among all the spiders in the world. Commonly balloon more when the wind blows because the silk threads gain more electric charge.

Experiment To Show How Spider Fly:

To understand how spiders fly, consider this experiment.

In this experiment, the plastic sheet shows the flying spider while the balloon represents the electric field.

This experiment explains that the method of flying spiders depends on the wind and the electric field in the air.

These all facts make them the most impressive and stunning creatures in the living world. Although they do not cause harm, many people still do not want them around their houses.

Why Do Spiders Glide?

There are specific theories explaining the causes of spider gliding. Among them, two approaches are most common.

Still, many observations and research are going on to explain the real cause of exhibiting flying adaptations by some spiders.

No, they are not winged. They fly with the help of electric fields present around the world. The silk helps them glide in the wind.

When present on the tree, rock, or at any high level, the flying spider first starts secreting the anchoring silk on the surface. This attachment helps the spider from falling from the tree.

Now the spider raises its front legs into the air, and the trichobothria (specialized hair) conducts the electric charge from the surroundings and transfers it to the silk thread.

When it releases a long silk thread from the abdomen to the surface, it finally takes off and flies in the air. It shows that the spiders are wingless creatures.

Yes, the gliding spiders exist. But their way of flying is different from other living organisms because they lack wings.

The flying spiders uniquely secrete a particular type of silk called the anchoring silk that helps them fly while conducting the electric field from the surroundings.

They are also called bridge spiders because of their massive distribution near or under bridges. They are usually attracted to habitats that have more light or where water is more.

Their attraction toward light is because they can easily find food such as bugs.

Interestingly they are not dangerous at all. Although they contain venom, their venom is not poisonous. They do not bite humans, but in case they bite, the individual will heal quickly.

In 2020, social media was full of posts that they are coming and are dangerous to humans. But, scientific study shows that they does not cause harm to humans and the posts were not true.

This article explains various amazing facts about how flying spiders have conquered the sky.

They are found in most domains of the world. The most remarkable fact among all the 11 facts is that flying spiders do not contain wings on their body. Instead, they use the electric field and the anchoring silk to glide around.

The electric field is naturally in the air produced by a thunderstorm around Earth. Trichobothria (hair on the spider body) can sense these electric charges. Silk is negative, so the trichobothria attract the negative charge and use both the wind and electric field to fly.

The most common reasons for flying are to start a new colony, find food and better shelter, and reduce competition.

If you like to read more about spiders, also have a look at the most deadliest spiders and biggest spiders in the world.