Belugas whales, also known as white whales- because their unusual bright white colour- are one of the most familiar and easily distinguishable whales in the Arctic. This colour develops over time as calves are born grey or sometimes even brown and only fade into white as they become sexually mature around five years of age.

If you’re interested in any particular topic, please use the below headings to guide you through to your preferred topic! If not, enjoy the article in its entirety!

What do beluga whales eat?

Where do beluga whales live?

Beluga whales are dark grey as calves. Their skin lightens as they age, becoming white as they reach sexual maturity. They lack a pronounced rostrum, or beak, and the top of their head is characterized by a round, flexible “melon” that focuses and modulates their vocalizations, including echolocation “clicks.” They are a toothed whale, possessing 36 to 40 teeth total in both the upper and lower jawbones.

The genus name Delphinapterus translates to “dolphin without a fin.” Instead of a dorsal fin, belugas have a tough dorsal ridge, which allows them to swim easily under ice floes (sheets of floating ice). Unlike other whales and dolphins, their neck vertebrae are not fused, so belugas can nod and move their heads from side to side easily.

Beluga whales are covered with a thick layer of blubber that accounts for up to 40 percent of their weight. The blubber keeps them warm in the Arctic waters and stores energy as they can go extended periods of time with no food. Some beluga populations shed their outer layer of skin each summer during an annual molt. They rub against coarse gravel in shallow waters to help remove the layer of old, yellowed skin.

Belugas generally live together in small groups known as pods. They are social animals and are very vocal communicators that employ a diversified language of clicks, whistles, and clangs. Belugas can also mimic a variety of other sounds that they hear. For example, considering the noise pollution that has come with increased cargo ships and boats in the water, they have been noted trying to mimic these sounds as well.

Belugas produce sounds by building up air pressure in the nasal cavities within their melon ( the echolocation organ at the front of their heads) and then forcing the air through a set of “phonic lips” atop each cavity. The vibrations of the lips result in the whale’s typical repertoire of echolocation clicks, pulse bursts and chirp-like whistles and squeaks.

These whales are common in the Arctic Ocean’s coastal waters, although they are found in subarctic waters as well. Arctic belugas migrate southward in large herds when the sea freezes over. Animals trapped by Arctic ice often die, and they are prey for polar bears, killer whales, and for Arctic people. They are hunted by indigenous people of the north, and by commercial fisheries that brought some populations, such as those in the Gulf of St. Lawrence, to near collapse.

What do Beluga Whales eat?

Beluga whales feed on fish, crustaceans, and worms. As they eat a wide variety of fish, belugas will also happily eat cod, herring and salmon, as well as squid, shrimps and crabs. Despite having teeth, belugas don’t actually chew their food, prefering to swallow it down whole!

3. Beluga whales are born dark grey and get lighter as they age, eventually becoming white once they’ve reached sexual maturity.

6. Beluga whales shed their skin each summer by rubbing against coarse gravel.

7. Beluga whales do not have fused neck vertebrae like other whales, which allows them to move their heads up, down and side to side.

9. Beluga whales are often called the “canaries of the sea” because they vocalize many different sounds, including clicks, whistles, chirps and squeals.

Where do beluga whales live?

Beluga whales live in the high latitudes of the northern hemisphere in cold Arctic and sub-Arctic waters. Some populations have decided to put down roots and are resident in one particular area, for example the Cook Inlet in Alaska where unfortunately their numbers are in decline and they are now recognised as being ‘Critically Endangered’. Others, however, undertake seasonal migrations to and from their favourite feeding and breeding grounds, the latter of which can be several hundred miles up-river.

Similar to tree rings that can be used to age a tree, beluga teeth acquire a “growth layer group” (GLG) for each year they age. The oldest beluga on record had 80 GLGs, though this may be an underestimate of the whale’s true age. The oldest Cook Inlet beluga whale had 49 GLGs.

Beluga whales are believed to breed around late winter and early spring. Depending on the population, this may occur during migration or in their wintering grounds. Females reach sexual maturity when they are about 9 to 14 years old, and males when they are slightly older. The gestation period usually lasts 15 months, and calves nurse for 2 years. Females give birth every 2 to 3 years.

Belugas generally give birth during summer in areas where the water is relatively warm, as newborn calves lack a thick blubber layer to protect them from cold water. Calves benefit from the warmer water of shallow tidal flats and estuaries.

Beluga whale populations are exposed to a variety of stressors and threats, including pollution (e.g., heavy metals, chemicals, trash), shipping, energy exploration, commercial fishing, extreme weather events, strandings, predation from killer whales, subsistence harvesting, and other types of human disturbance such as underwater noise. The Cook Inlet population faces additional threats because of its proximity to the most densely populated area of Alaska (Anchorage) during the summer season.

Beluga whales are susceptible to habitat destruction and degradation. This can range from physical barriers that limit their access to important migration, breeding, feeding, or calving areas, to activities that destroy or degrade their habitats. Physical barriers may include shoreline and offshore development (oil and gas exploration, dredging, pile driving) and increased boat traffic. Contaminant releases may also degrade habitat.

Contaminants enter ocean waters from many sources, including oil and gas development, wastewater discharges, urban runoff, and other industrial processes. Once in the environment, these substances move up the food chain and accumulate in predators at the top of the food chain such as beluga whales. Because of their long lifespan and blubber stores, belugas accumulate these contaminants in their bodies, threatening their immune and reproductive systems.

Overfishing, habitat changes, and the impacts of climate change can decrease the amount of food available to beluga whales. Without enough prey, they might experience decreased reproductive rates and increased mortality rates. Understanding the potential for food limitations to hinder population recovery is especially important for Cook Inlet beluga whales because they live in an area with high human activity.

Live strandings occur when marine mammals become “beached” or stuck in shallow water. The cause of most stranding cases is unknown. Belugas may strand when molting (to avoid predation or other threats, such as noise and vessel traffic), when chasing prey, or when suffering from injuries or disease. Unlike other whales and dolphins, healthy belugas that live-strand are usually able to refloat and swim to deeper water during the next high tide. Unfortunately, belugas have died after stranding on their sides and inhaling muddy water. Larger belugas with compromised immune systems also may not survive stranding through a tidal cycle.

Underwater noise pollution interrupts the normal behavior of beluga whales, which rely on sound to communicate and echolocate. If loud enough, noise can cause permanent or temporary hearing loss. This is of particular concern for the Cook Inlet population, which inhabits an area with high vessel traffic, oil and gas exploration and development, dredging and pile-driving, military operations, and other noise-making anthropogenic (human-caused) activities.

The WWF have shared an account from a popular Beluga spot in Hudson Bay in Canada and recall:

“Our small raft bobs in the water of Manitoba’s Churchill River, where the summer-warmed river meets the cooler Hudson Bay. All around us a feeding frenzy is underway.

As dozens and dozens of beluga whales feast on fish, our group finds it hard to contain our excitement. We point to a white-and-gray pair—mother and calf—that swims directly toward us and then plunges deeper. Suddenly, an adult appears two feet away, and we all exclaim. If whale-watching involves squinting into binoculars at the fleeting sight of a tail, this must be whale-communing.

Our small group has come to Churchill, the “Polar Bear Capital of the World,” in July. In a few months, thousands of wildlife lovers will arrive to see the largest concentration of polar bears as they wait for the bay to freeze. But right now, these waters are home to more than 3,000 belugas. The Western Hudson Bay attracts around 57,000 belugas each summer.

These sociable whales, up to 15 feet long, migrate here every summer to give birth, nurse their young, and feed in productive waters. Like the closely related narwhal, they lack a dorsal fin, an adaptation that helps conserve heat in their arctic home. The beluga’s flexible neck allows the head to move up and down, and from side to side. And a bulbous flexible forehead, called a melon, allows the beluga to make facial expressions as well as sounds.

Later we come across another pod of belugas, and our boat driver lowers a hydrophone a few feet below the surface of the water. The concert begins, and we learn why belugas are called canaries of the sea.

We hear a symphony of chirps, clicks, squeaks, whistles, squeals, and moos; it’s an impressive, wide-ranging repertoire. So many belugas join the chorus that it’s impossible to distinguish one message from another. But, of course, we are not the intended audience.

While these communicative whales seem to be doing fine here, climate change is affecting other parts of the belugas’ arctic home. Melting sea ice means more open water for increased shipping, marine construction, and oil and gas exploration. These activities cause underwater noise pollution, which interferes with beluga communication and could cause them to have difficulty navigating, finding food and mates, and detecting nearby predators.

After my front-row seat at the beluga concert, I return home newly inspired to protect these amazing whales and vulnerable wildlife everywhere.”

The WWF also offer this as an amazing trip one could consider booking through them if interested!

The Story of One Whale Who Tried to Bridge the Linguistic Divide Between Animals and Humans:

Millions of years before we humans came along, the earth’s oceans were a vast, unbroken web of whale song. The complex courting arias of humpbacks, the distinct clicking dialects of migrating sperm-whale clans, the congalike poundings of Pacific grays, the multi-thousand-mile moans and blips of massive blue and fin whales conversing across oceans at octaves well below our range of hearing, the nearly nonstop Arctic chatter of belugas: All of them are being drowned out now by our clamor.

And yet a single beluga managed to make his voice go global again, and in the only medium left him: the worldwide web. The extraordinary history of Noc (pronounced no-see) resurrects a captive who somehow has found a way to speak to us, both literally and figuratively, of the true nature of his kind.

If you’re intrigued as to how the very detailed and technical story unfolds- have a look here! 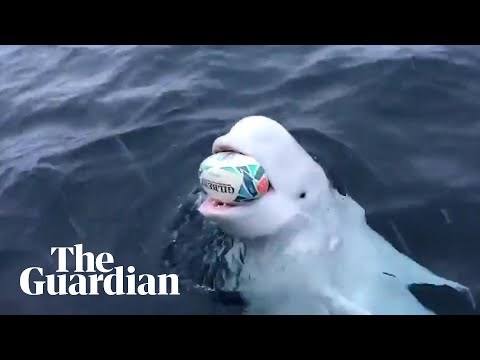 Beluga whales are marvelled for being incredibly interesting beings, the white whales of the ocean are very playful and curious creatures. Be sure that if you ever see one in the wild you are very lucky indeed! And if even one is in captivity, question its wellbeing there and avoid supporting places which endorse such cruelty!

If you’ve enjoyed reading about these whales, take a look at our other blogs about whales! Like Where to see Sperm Whales and our complete overview over whales sightings!