Welcome to the Best Places to See Lynx.

Can’t wait to see the iconic Iberian Lynx? We selected the Best Places to See Lynx in the wild.

A nomadic, nocturnal and solitary animal: it is only socialised during the rutting season, in the first months of the year. Litters are usually between 2 and 4 puppies. Although in winter they have activity during the whole day, as soon as the temperatures rise, they tend to remain hidden until the twilight. 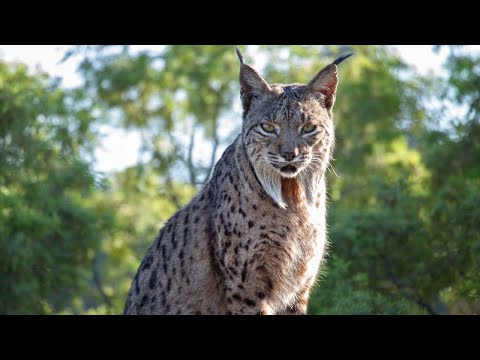 This feline can distinguish a rodent from 75 meters away. The name of this species comes from a Greek term meaning ‘bright eyes’. It has yellowish-green eyes ready to see both day and night.

If you also like to read more about Big Cats, we have posts on the best places to see Tigers

Iberian lynx have large, pointed ears topped by a plume of black hair, something very suitable for hiding in the undergrowth. Sideburns of hair hang from their cheeks and, when mature, recall the beard of a human being. Their skin is full of leopard-like spots, but they are much smaller than other wild cats. (Another Best Places to See Iberian Lynx)

The Lynx pardinus has been in danger for a long time and there are several reasons why this peculiar feline is at risk of disappearing, such as the destruction of its habitat, illegal hunting, among other reasons.

Let us tell you a little more about this charming feline.

You could either read the whole article from beginning to end or go ahead and jump right to your favorite section.

The Iberian Lynx or Lynx Pardinus is a medium-sized feline that can be found on the Iberian Peninsula specifically in Spain and Portugal, south of the European continent.

Its most distinctive features or characteristics, apart from its medium size within felines, are its triangular ears with hair on the tip, its small mane around the cheeks and neck, its spots, its tail of between 8 cm and 15 cm and its way of hunting, as it is capable of jumping up to 5 meters away.

The first lynx to arrive in Eurasia migrated from North America 2.5 million years ago. So we got some new Best Places to See Iberian Lynx.

Due to the glaciations of the Pleistocene, the lynx suffered constant population expansions and contractions, appearing phenomena of speciation, which is known as the process by which a population of a particular species gives rise to another, reproductively isolated from the previous population and each other, which over time will accumulate other genetic differences.

The Iberian lynx was established as a species some 1.8 million years ago in one of Europe’s main glacial refuges: the Iberian Peninsula. It is, therefore, a jewel of the Iberian Mediterranean mountain.

The evolution of the lynx is linked to that of the lagomorphs (rabbits and hares), which must have been their preferred prey.

Therefore, the Iberian lynx is found on the peninsula, to a certain extent, isolated from the rest of Europe by the barrier of the Pyrenees, in a land abundant in a dam, the rabbit, which can meet all its energy requirements and thus, Iberian lynx and rabbit become an indissoluble binomial.

However, they also eat birds, such as partridges and quails, other small mammals, such as field mice, and reptiles, such as lizards.

The Iberian lynx is what is called an “umbrella species”: this means that by conserving the lynx, we are also protecting the habitat in which it lives, i.e. the Mediterranean forest and many other species.

Its role as a great predator also exerts a control so that there is no overabundance of other predators such as foxes and mongooses, curiously, as a consequence the pressure is eliminated on the rabbit, its main prey, which in turn is the basic food of species also threatened as the Iberian imperial eagle.

In populations as small as the Iberian lynx, the health risks associated with low genetic diversity increase greatly, and that is why, as a complement to programmes that focus on recovering the species’ natural habitat, captive breeding projects are launched to provide a sufficient number of healthy animals.

It can therefore be said that the survival of the Iberian lynx is closely related to hunting activity, i.e. hunting. Its control and adequate management is absolutely essential to avoid a safe extinction of the species.

Also of great importance is the impact that the construction of road, railway and hydraulic infrastructures have on the lynx, since they alter its habitat and fragment the territory, causing the loss of critical areas.

There are numerous and tremendous decisions taken by public administrations that slide the world’s most endangered feline towards definitive extinction. One of the Best Places to See Lynx

In recent years, the approval of the National Hydrological Plan stands out, which includes the construction of a dozen large reservoirs in the lynx distribution area, and the Infrastructure Master Plan which includes several cases of highways, motorways and high-speed trains in areas of interest to the lynx.

The construction of ecoducts (or green bridges) to prevent road accidents are one of the measures that can reduce deaths, as animals can move from one habitat to another through a bridge with vegetation above the roads.

The captive breeding programme also ensures the conservation of the species’ genetic material. With a series of breeding animals in captivity, they are paired so that they have offspring that with the passage of time will be introduced into their natural habitat.

The breeding programme is currently being developed in the Acebuche Breeding Centre, which is located in the Doñana National Park and in the Zoo Botanical area of Jerez de la Frontera, in Cadiz.

These facilities are used to keep the specimens in quarantine, for the maintenance of puppies or to house young or adult lynx. In this way we are trying to save the feline species that is most threatened around the world and that if everything goes on like this could disappear soon.

After 20 years of work, the Iberian Lynx, the world’s most endangered feline, included as a ‘critically endangered’ species on the Red List of the International Union for the Conservation of Nature (IUCN).

With a population that in 2002 barely reached 100 individuals in Spain, was reclassified as ‘endangered’ in 2015.

In Extremadura, the first releases began in 2014 in the Matachel Valley, where the largest nucleus of the lynx population is currently found, as it has “an ideal Mediterranean habitat and a high population of rabbits, the main food of the feline”.

The objective now is to achieve a quantifiable increase in population and to promote connectivity between population nuclei in all reintroduction areas.

The Eurasian lynx is one of the most widespread cat species. Its European distribution area reached from the Pyrenees in a wide belt to the Ural Mountains at the beginning of modern times.

According to some scientists, however, the lynx was missing on Iceland, the British Isles and the Mediterranean islands, as well as in the coastal hinterland of the North Sea, in Denmark, in the southern Norwegian fjord country as well as in the far north of Fennoscandinavia and on the entire Kola peninsula.

In Asia, the lynx was spread over almost all of Siberia from the Urals to the Pacific, as well as in northern China, Tibet, parts of Mongolia and in Turkestan. Its distribution limit reaches the Arctic Circle in the north – no other feline species penetrates further north than the Eurasian lynx .

In the south, its range extended as far as Nepal, northern India, northern Pakistan, Persia and possibly even Palestine.

Prior to repopulation, the last lynxes in Germany were killed in 1818 in the Harz Mountains near Lautenthal, in 1846 in the Swabian Alb near the ruins of Reußenstein, also in 1846 near Zwiesel in the Bavarian Forest and around 1850 in the Bavarian Alps.

In the French Alps, the Eurasian lynx was last observed in 1903, in Switzerland in 1904 at the Simplon Pass, the lynx was able to survive for a relatively long time in some parts of Austria. The last autochthonous Austrian lynx was hunted in 1918 in the Balderschwanger Valley in the Bregenzerwald.

Between 1918 and about 1960 the Eurasian lynx was largely extinct in Western Europe. However, the species survived in large parts of northern, eastern and southeastern Europe and in most of the Asian regions, the most western occurrences being in southern Sweden, eastern Poland and eastern Slovakia around 1960.

To be able to see the Iberian Lynx in freedom is not an easy task, due to its scarce population and because, in general, they flee and are elusive to human presence. But with luck and time you will be able to see this wonder of nature. We collected some of the Best Places to See Iberian Lynx

Its geographical distribution throughout the peninsula in its day was much wider than the current one, being distributed almost all over it. Now there are very specific focal points in Andalusia to be able to see them.

In Sierra Morena there are currently two well-differentiated population centres: Firstly, the shared area of Sierra de Cazorla and Sierra de Andújar. Between Córdoba and Jaén, you can easily organise a weekend to enjoy the area and make a route so that, with any luck, you can see it.

We advise you to place yourself in a viewpoint or observatory with a good view of the mountains and good binoculars.

It is important to be silent and attentive, if it is not of any use. Make continuous sweeps of the slopes with the binoculars, slowly because maybe you can see some on a rock resting and sunbathing.

Located in the southwest of Andalusia and mostly belonging to Huelva, this National Park includes the highest population density of Lynx in Spain. Transit for many migratory birds before flying to Africa. The area of Raya Real in Coto del Rey is a route through the vegetation of the Park where, hopefully, you will see some of these felines.

You can visit its official website, where you will also find guided tours.

The Iberian Lynx experience, with “Untravelled Paths” offers a guided tour in the direction of Andalusia for 4 nights. In the following link you will find all the information you need: this.

Yes, as you read it. WWF (The World Wide Fund for Nature)  is an international non-governmental organization  working in the field of wilderness preservation, and the reduction of human impact on the environment

This time they offer us the opportunity to help these cute cats from home. You can adopt your little lynx here.

The lynx is a beautiful animal worth seeing in the wild. The lynx lives as a loner in large forest areas. The cat of prey, also called “brush ear”, was once widespread in Western Europe.

Its worst enemy was always man, who pursued it mercilessly. The largest cat in Europe was almost exterminated by the targeted persecution.

Today there are again single specimens living in some German low mountain ranges.